A few hours ago Apple reported the financial results of the second fiscal quarter confirming all the omens: iPhone sales fall with almost 10 million units sold less and a drop in profits of 8,6%.

Sales, revenue and profits all down for Apple

It is probably still too early and it would be more appropriate to analyze in greater detail and with greater rest the data related to sales, income and profits reported last night by Apple, however, these data leave no room for doubt: 9,8 million less iPhones have been sold than in the same quarter of the previous year, and about 24 million less than in the first quarter of 2016. This represents a 16% drop in sales of the company's flagship product. 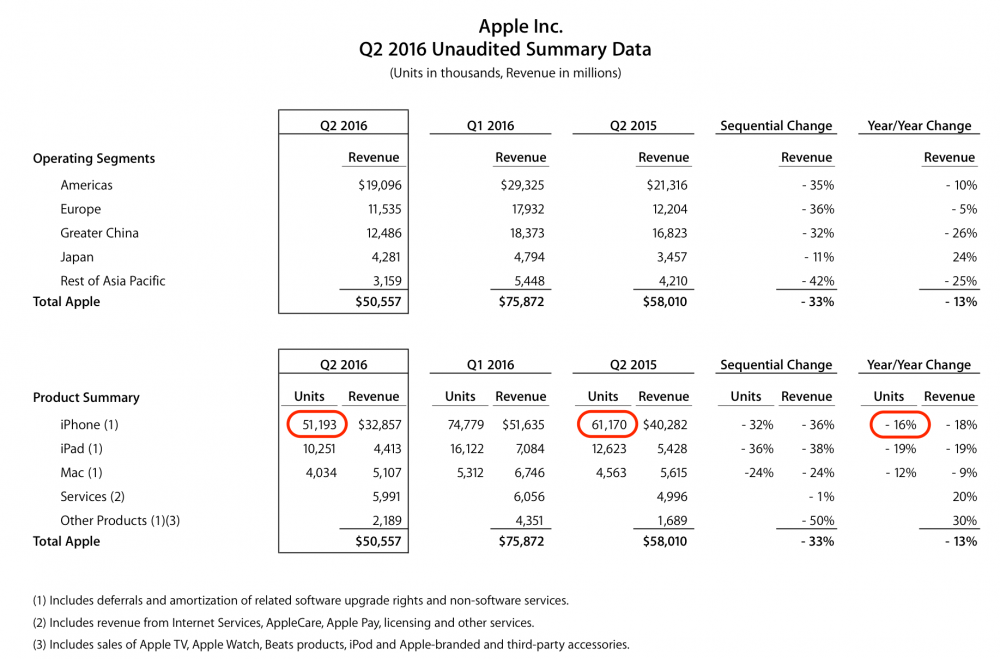 And this is the main reason for the drop in income and profits reported by Apple, something that it had not happened for 13 yearsIn 2003, when the iPhone, iPad or Watch were not even in our imagination.

A wake-up call and lack of self-criticism

Without any doubt, this adverse situation constitutes an obvious wake-up call to Apple, and it is not the first because the company has already ventured that the results would not be too good. But what is the company's attitude now.

On the one hand, and despite the undeniable, the company has wanted to reassure investors and therefore has approved an increase of 50.000 million dollars in the share buyback program and 10% in the quarterly dividend, paying 0,57 dollars per share on May 12.

Furthermore, Apple shows a lack of absolute self-criticism and, at least facing the viewer, seems to look the other way.

Tim Cook justifies the 26% drop in China stating that "We are not with the wind in our favor like a year ago or 18 months ago, but it is still a strong economy" and that "The previous year we had grown by 81%."

And during the earnings conference, Cook congratulated himself on a robust results despite "an adverse macroeconomic situation" being satisfied "with the strong and continued growth of the income from services", referring to iCloud and Apple Music. "We are very pleased with the continued strong growth in service revenue, thanks to the incredible strength of the Apple ecosystem and our growing base of more than XNUMX billion active devices," it said.

You can say higher, but not clearer. Apple is flooding its storefront with products and seems to have missed the target of a specific target: middle class that somehow can afford to pay almost 500 euros for an iPhone "lightened in performance" and with a design that is almost four years old, or upper classes that opt ​​for a watch of 18.000 euros or simple straps of 750 euros. Not even they seem to know.

But the key is in the iPhone. It accounts for 65% of the company's sales, revenues and profits, so its continued decline in sales is more serious than some are determined to admit. The tactic of raising the price of the iPhone every year is failing, as is including a couple of new features and claiming it is a "new device." Cook himself claimed that there has been a slower update rate for users to migrate to iPhone 6S, compared to iPhone 6

Those who faithfully follow Applelized, and especially those who listen to Apple TalkingYou know that, although we are not expert analysts, we warned it when Apple was still congratulating itself on beating sales records: "everything has a limit", "until when will Apple maintain this rate!", "What will happen when the company hits the ceiling? ».

Well, that moment has come. Apple has peaked With the iPhone, users seem to be getting tired of their price and update schedule; the company will have to make changes because now there is no Steve Jobs coming back to save his ass.

After the close of the session on Wall Street, Apple shares had fallen 8%.