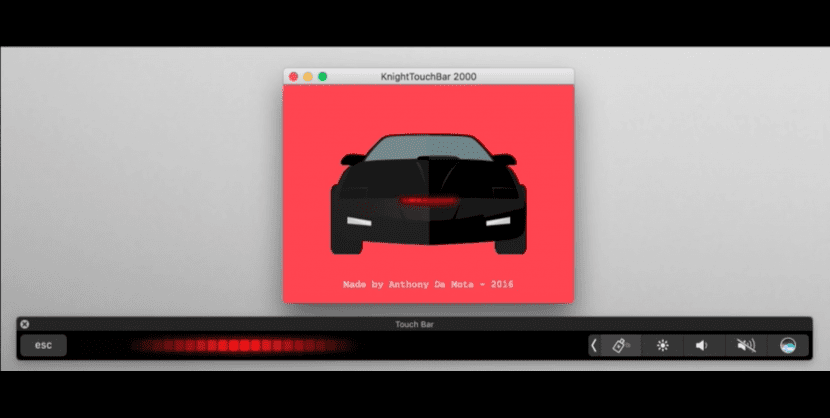 The weeks go by and little by little new utilities appear for the novel Touch Bar. It is about the technological advance that Apple has included in certain models of its new MacBook Pro and that we are sure that over time will be a continuity in all models.

Apple itself has given a place in the Mac App Store to house under the same umbrella all the applications that are adapting to the new Touch Bar over time. In that section you can find everything and proof of this is the application that we want to comment on today.

Today videos are running like wildfire on the net where we can see how a developer has implemented the light effect of the mythical Fantastic Car in the Touch Bar. In this case, the application not hosted on the Mac App Store itself but there are already many people who have installed it and it has been uploaded to GitHub. In the following link you can download it if you have one of the new MacBook Pro. The application calls itself KnightTouchBar 2000 .

When you play it, you can even enjoy the original soundtrack of the series that each and every one of us saw when we were a few years younger. In my case, since I don't have a MacBook Pro with Touch Bar, the only thing I have been able to observe is a window in which KITT is seen and the little light that I mentioned to you in addition to hearing the soundtrack.

As you can see in the video that we attach, in the case of having a MacBook Pro with Touch Bar if you are going to be able to turn your MacBook into "retro" and enjoy your little one loved KITT. It is an application with no meaning whatsoever, but one that is captivating many due to its "memory" effect.