The Lisa project was started at Apple in 1978 and slowly evolved to design a powerful personal computer with a graphical user interface (GUI). The Lisa computer was to be directed towards business clients. Around 1982, due to disagreements with John Couch who was the project manager, Steve Jobs was forced to leave the Lisa project, so he joined the Macintosh project. Contrary to popular belief, the Macintosh is not a direct descendant of Lisa, although there are obvious similarities between the systems, and the final revision, Lisa 2/10, was modified and sold as the Macintosh XL. 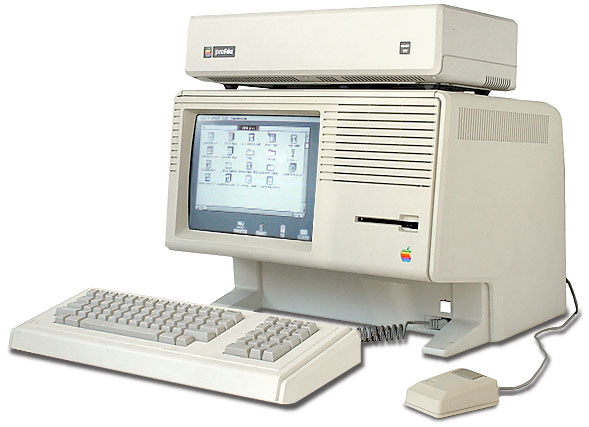 Since Steve Jobs' first daughter, born in 1978, was named Lisa Jobs, it usually follows that the name also had a personal association and perhaps the acronym was later invented to fit the name.

The Lisa was unveiled in January 1983 (announced January 19) at a cost of $ 9.995. It was the first commercial personal computer to have a GUI and a mouse (after Xerox Star). It used a Motorola 68000 CPU clocked at 5MHz and had 1MB of RAM. The first Lisa had two 5,25-inch floppy drives (nicknamed the "Twiggy" drive). They had a capacity of approximately 871 kilobytes, but required special diskettes. These drives had a reputation for being unreliable, so the Apple Macintosh, originally designed to use a simple "Twiggy", was modified to use a Sony 400k microfloppy drive in January 1984. An external drive was available as an option. 5 MB Apple Profile hard drive, originally designed for the Apple III. The later model, Smooth 2, used a single 3,5-inch floppy drive and, optionally, 5 or 10 MB internal hard drives. In 1984 at the same time that the Macintosh was officially unveiled, Apple announced that they were providing free upgrades to 5MB hard drives for all Lisa 1 owners.

The Lisa offered a cooperative multitasking operating system, not preferential (that did not appropriate control). It also offered virtual memory. These two features were extremely advanced for a microcomputer at the time. The use of virtual memory together with a rather slow disk system, at times, made the system seem idle. The Lisa also organized its files in hierarchical directories, making use of large disk drives practical. The Macintosh also adopted this disk organization design for its HFS file system. Conceptually, the Lisa resembled the Xerox Star in that it was intended as an office computer system, consequently the Lisa had two main user modes: the Lisa Office System (Lisa's Office System) and the Workshop (Workshop). The Lisa Office System it was the GUI environment for the end users. The Workshop was a program development environment and was almost entirely text-based, although it did use a GUI text editor. The Lisa Office System it was eventually renamed "7/7", in reference to the seven application programs provided.

The failure of Apple Lisa

The Apple Lisa became a commercial failure for Apple, the biggest since the 1980 Apple III disaster. The business (computing) customers that the Lisa was aimed at resisted the high price of the computer and They largely chose to work with the less expensive IBM PCs, which were already beginning to dominate the desktop computing market in business. Lisa's largest customer was NASA, which used the LisaProject for project management and got into serious trouble when the Lisa was discontinued. The Lisa was also seen a bit slow despite its innovative interface. The nail in the coffin for the Lisa was the launch of the Macintosh in 1984, which helped to discredit the Lisa since the Macintosh also had a GUI and a mouse but was much less expensive. The Lisa, like many products, was a victim for being too ahead of its time. Before the Lisa line was discontinued in August 1986, two last models were released, the Lisa 2 and the so-called Macintosh XL.

At a time when 96 kilobytes of RAM was considered an extravagance, much of the Lisa's high price and therefore its commercial failure can be attributed to the sheer amount of RAM that the system came with. Keep in mind that 1 MB of RAM, then, cost almost 5.000 dollars, half of what the Lisa cost (10.000 dollars). Most personal computers only started to appear with one megabyte-sized RAM in the early 1990s.

Although she was a commercial failure in her time, Lisa is seen as a notable success. Although too expensive and limited for individual desks, there was a period when it seemed that almost every moderate-sized organization had, in every major office, one or two shared Lisas. The performance of the Lisa was poor and the software somewhat limited, however, what it did, it did very well. Using the Lisa software and an Apple dot matrix printer you could write some documents with very professional finishes compared to the other options available at the time. This advantage led the Lisa to many larger offices, although the price limited the number of Lisas that could be purchased. Since the number of people who had used a Lisa was far greater than the number of Lisas sold, this meant that when the lower priced Macintosh came along, there was a notable group of people already previously convinced of the benefits of a machine like Lisa

The end of Lisa

In 1989, Apple buried about 2.700 unsold Lisas in a landfill in UTAH and got a tax waiver on the land they rented for it.

Like other early GUI computers, the Lisas, which are still in operation, are now quite valuable as collectibles, for which people would pay hundreds of dollars.