Next Friday June 26 the Apple Watch It goes on sale in a second wave of countries including Spain, Italy or Mexico. So far, virtually everything that has been written is positive, save for some initial criticisms. Vanesa Friedman, Fashion Director at The New York Times However, he has decided to break with his apple watch and explains why in the following article, which, I assure you, has no waste, a different view of everything we have read so far and from someone who has already experimented with the watch.

I wanted it to work. I wanted to fall in love, as did many of my friends. "Take a while," they said. Don't expect a crush. Let it form over time.

So I did it. He knew that other people looked enviously at what he had. However, a month and a half after we first met, I've decided it's time to, well, end it.

I'm breaking up with my Apple Watch. The relationship was not, despite all my expectations, what I needed. All the attention on San Francisco and Apple's next big innovation that week (streaming!) Made me realize we weren't on the same page.

Still, I will never regret the weeks we spent together as I learned some valuable truths about myself.

Like, for example, that I don't want to be defined by a topic of conversation on my wrist.

There's a reason I carry the same bag (no logo) everywhere I go, a reason my (pre-Apple) watch didn't have any sounds or chimes. tourbillon; one reason I gravitate towards clothing that is not identifiable by season or designer and not featured in any advertisement I've seen.

I spend a lot of time in a world where products are a symbol for people, and I know very well the risks of being associated with this semiology (although I fully recognize my desire to associate it with others).

But when I started using the Apple Watch (the 38 millimeter model with the Milanesse Loop band, which is the smallest size with a flexible stainless steel bracelet), became a topic of conversation no matter where it was: at work meetings, at the cake shop, in my son's athletics. It has been like that everywhere, it has been announced to so many people, that it was simply unmistakable.

First of all, everyone wanted to hear from him. So they wanted to try it. Then they made certain assumptions about me.

Which, frankly, I would have done to any woman like me walking around with a big black box on her arm.

Because no matter how attractive he is Apple Watch Compared to other smartwatches or smartbands, no matter the aesthetic advance of its rounded corners and rectangular display, it still looks like a gadget. Especially someone, like me, with relatively small wrists.

It is not only that its sphere effectively covers the entire width of my forearm, its modern little screensaver that so many experts have praised - the Mickey, the butterfly or the galaxy (which is the one I have) or the pseudo-wristbands (the ones that, specifically, they're always in all the photos of the watch (and the ones that actually make it look like a watch) - it's also in power save mode most of the time.

Every time I see him, I want to yell, "Teleport me, Scotty."

Not that it did me much good. When pressed, the image does not appear. Even when I forcefully move my arm back and forth, it often takes several tries before Earth appears. The default position is blank.

Like my default position when it comes to reading an email or headline text on the small screen, it involves raising my wrist to close to eye level - or, if I receive a call and my phone is out of coverage , I have to talk on the air. If you are with your children or your acquaintances come to see you, it is almost an invitation to ridicule.

Why is it more embarrassing than constantly staring at the phone? My friends told me when I complained. 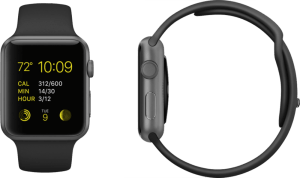 It is a valid question, but after some reflection I think the answer is simple: you carry the phone in your hand, and we are used to seeing people who read something in their hands. Like, for example, books. But seeing someone glancing at your wrist (or just glancing sideways) conveys something else entirely: (1) rudeness or (2) being a geek.

This doesn't seem to have bothered the high-tech writers, most of whom persuasively wrote positive reviews of the gadget, primarily based on what it could do for you. And it's certainly more discreet than Google Glass, though I'm not sure it's much.

Of course, all of this would probably pale in importance if the watch truly transformed my life, like my iPhone. But I've never had a problem stepping away from my emails when I have to focus on something else - indeed, I trained myself to compartmentalize - so I need specific alerts on what is important.

And the small screen is too small to really read, so I have been more annoyed than happy when alerting me to texts from my loved ones; and when he saw a headline, all he wanted to do was find the rest of the story.

Furthermore, the routine tasks that watch apps can replace - handing out airline boarding passes, opening hotel room doors - seem less like progress than loss of control. Call me Luddite, but honestly, I don't mind unlocking with my real hands. The new clock operating system announced this week may make a difference, but I'm not sure I have the patience to wait.

Likewise (and I know this will be heresy for anyone really excited about Fitbit's upcoming IPO), fitness apps - tracking my steps, measuring my heart rate, the tell me to get up when I'm in the middle of an article - it seems more of a burden than a release.

I've worked hard to get rid of exercise machines telling me how hard I'd worked - how many calories I'd burned, how many stairs I'd climbed - in part because I knew I was cheating most of the time anyway, and therefore I could not trust the results, and partly because it became an excuse to modify, or not, my next behavior.

But the truth is that I know when I'm in shape; I can see the difference in my body and feel it when I ride my bike in the park. The watch He threatened to drag me back into a numbers neurosis, and that's a temptation I'd rather not have. (Also, I have a lot of friends who look at their activity meter in the middle of the conversation, and then immediately jump in and start walking around energetically, to feel like it's really effective in their life.)

I liked the fact that I could silence my phone, and the watch vibrated when, for example, my children called and I had to take the call. But in the end that was not enough.

When I told a colleague about the breakup, he observed that maybe I was not the type for him. Apple Watch. That I should make sure to say to Siri on my wrist, "It's not you, it's me." You may be right.

Except I don't think so, and not just because opposites often attract. If not because I actually think I'm the person it was created for: a non-techie who doesn't have too many gadgets (a phone, an iPad, a laptop), but who might be seduced into buying from another because of its convenience.

That's the way Apple It increases market share and owns a category, after all: by the seduction of those who are not addicted to Apple. That's why the company worked so hard to get close to the fashion industry.

Full path to article: I'm from mac » Apple products » Apple Watch » Why am I going to break away from the Apple Watch